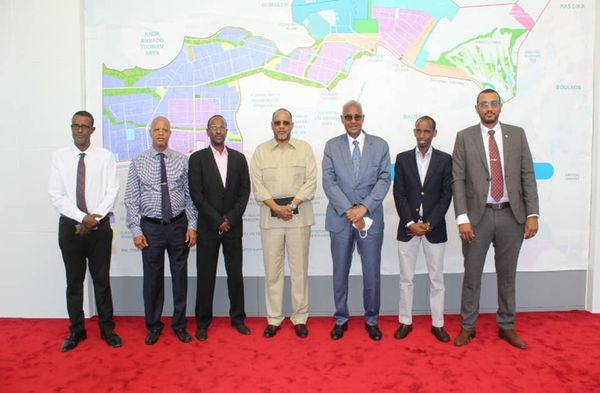 The Chairman of Djibouti Ports and Free Zones Authority, Mr. Aboubaker Omar Hadi had a meeting the Minister of Finances of the Jubaland region, Mr. Abdirachid Jire Khalinle.

Many topics subjects of common interets were being discussed such as the Djibouti shipping country, which proposes frequent services from the Turkish ports to the Kismayo port.

During this meeting, which took place at the Djibouti International Free Trade Zone, Mr Hadi was assisted by his advisor, Mr. Mohamed Aden Waberi whereas Mr. Abdirachid Jire Khalinle was accompanied by a Somali federal parliamentarian, Mr. Hassan Abdi Ismaël.

The delegation had also the opportunity to visit the port infrastructures in place at the SGTD as well as at the DMP, where they were welcomed by the Director General of each of these two sites.

It should be noted that the Jubaland region is rich in natural resources and has fertile land favoring farming activities and a sea abundant in fish.