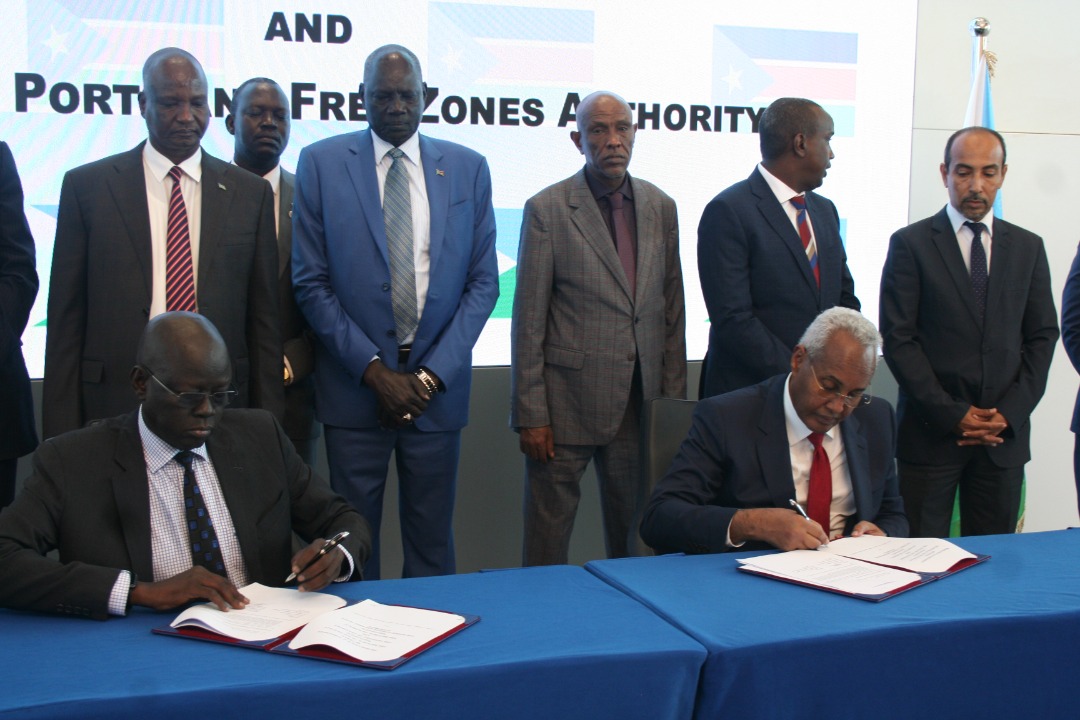 The Chairman of Djibouti Ports and Free Zones Authority, Mr. Aboubaker Omar Hadi and the Minister of Transport of South Sudan, H.E. Madut Biar Yel, signed on September 22nd, a Memorandum of Agreement (MoA) concerning the construction and development of six tributary ports (Bor-Shambe, Adok, Malakal, Melut and Renk) This MoA will allow the landlocked South Sudan to be connected to the world via Djibouti's Ports and corridor road. Note that there are already two Corridors, Djibouti - Addis - Juba - Kampala and Djibouti - Gambella – Malakal, one of which has already been used by our Djiboutian transport trucks.

On the sidelines of the signing of this agreement Mr. Hadi and Mr. Madut Biar Yel had a discussion mainly on the development of a refinery project and the pipeline which South Sudan's intention to export its natural gas from the Port of Damerjog. It should be recalled that recently the South Sudan refineries and petrochemicals company, already signed a land lease within Djibouti International Free Trade Zone (DIFTZ) for a period of 50 years to store oil equipment. the Vice President, H.E. Mr. Taban Deng Gai and the Minister of Information, Communication, Technology and Postal Services, Mr. Michael Makini Lueth, were also present. From Djibouti side, the Minister of Equipment and Transports,

H.E. Mr. Hassan Houmed Ibrahim, the Minister of Communication, in charge of Posts and Telecommunications of Djibouti, H.E. Mr. Radwan Abdillahi Bahdon and the Chargé d'Affaires of Djibouti in South Sudan. Mr. Hassan Robleh Mahamoud, participated in this ceremony.

The delegation also had the opportunity to visit our infrastructure including the Ports of Doraleh Multipurpose Port (DMP), Société de Gestion du Terminal Conteneurs de Doraleh (SGTD), the Port of Damerjog and the Djibouti Free Trade Zones.